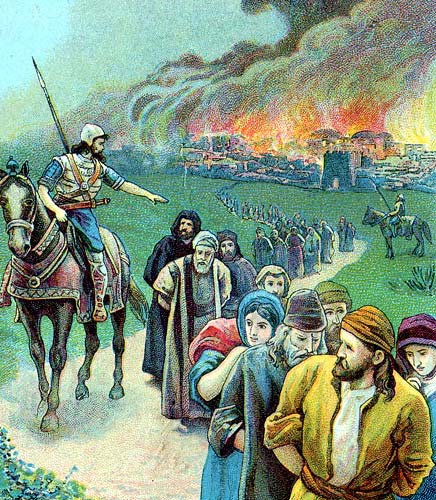 Lamentations 1:1 (New Living Translation) – Jerusalem, once so full of people, is now deserted. She who was once great among the nations now sits alone like a widow. Once the queen of all the earth, she is now a slave.

Lamentations 5:21-22 (New Living Translation) – Restore us, O LORD, and bring us back to you again! Give us back the joys we once had! Or have you utterly rejected us? Are you angry with us still?

These are the opening and closing verses of the book of Lamentations, written by Prophet Jeremiah. Many avoid Lamentations because it is about grieving with sorrow over a devastating event; in this case, it is Jeremiah mourning the horrible destruction of Judah by the Babylonians and taking the people as captives.

This happened about 1000 years after God delivered Israel from Egypt and took them into a land of milk and honey (see previous post on Milk and Honey Part 1 and Part 2). When David was King, Israel was a very powerful nation, and when Solomon was King, it was a very rich nation. Here they were in Jeremiah’s era, a captive people.

The books of the prophets in the Bible, explain that this happened because Israel turned her back on God; consequently her Kings ruled very badly; her court judges were corrupt; her markets had traders who often cheated buyers; men were unkind and women cared more for their dress and make-up than their character.

Despite the prophets warning Israel for about 500 years to repent, they refused; and were then cruelly destroyed by Babylon. If Israel’s leaders, greatly favored by God, could get it wrong so badly, what about leaders of our nations today? Is it wise to place ALL our hopes for a better life, a better country, in the ability of our leaders today?

Psalm 146:3-5 (New Living Translation) tells us – Don’t put your confidence in powerful people; there is no help for you there. When they breathe their last, they return to the earth, and all their plans die with them. But joyful are those who have the God of Israel as their helper, whose hope is in the LORD their God.

Lamentations teaches a wise lesson that human leadership, no matter how blessed, will fail the people, from time to time. The only secure anchor we have is God; so in these difficult times of political insecurity everywhere, seek God earnestly and sincerely, and he will keep you and give you peace, Amen!